Chief for Strategy and Innovation 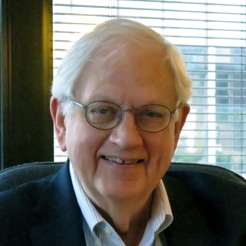 Thomas C. England, ME&A’s Chief for Strategy and Innovation, has more than 40 years of experience in policy and management positions in both the public and private sector with specific expertise in international development programs. He is one of ME&A’s co-founders and served as CEO and President, and as Chairman of the Board of Directors, for more than 30 years. He has also served on the Executive Advisory Board of the Professional Services Council (PSC) Council of International Development Companies. Mr. England is an expert in local economic development, regional development, decentralization, local governance, advocacy, and the relationships of public and private sectors and has managed USAID projects for over 25 years.

Previous to co-founding ME&A, Mr. England served for eight years as a principal of the National Center for Municipal Development (NCMD) in Washington, D.C., where he represented the interests of local governments, providing policy and federal program coordination for his clients. He spent two years at the local government level, while on a Federal Intergovernmental Personnel (IPA) assignment, as director of development for the City of Dunkirk, N.Y, managing the city’s first community development and housing assistance plan and supervising urban renewal, business, and economic development activities. He began his federal government career as a management intern and then management expert with the U.S. Information Agency before serving as an economic development analyst with the U.S. Office of Economic Opportunity. Mr. England is a co-founder and Director of the Albanian American Trade & Development Association, and co-founder and board member of the Corridor VIII LED Network, a regional public-private development association in the Southern Balkans. He received a B.A. in Political Science from State University of New York and an M.P.A. from the Graduate School of Public Affairs at State University of New York at Albany.