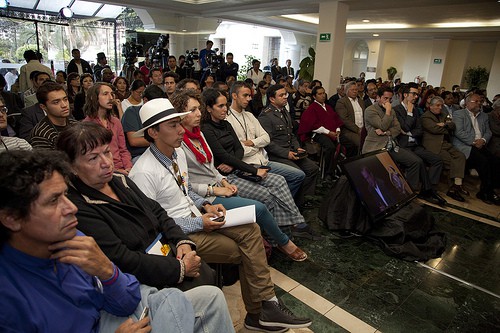 USAID/Ecuador began Participacion Ciudadana (PC) in 2003 to promote more effective citizen participation in key democratic processes and oversight of democratic institutions. The PC program has focused primarily on citizen-based oversight of democratic institutions, processes, and public spending; transparency and accountability by elected municipal officials; constructive input to enhance national and local legislation; consolidation of civic education programs, and promotion of dialogues between citizens and public officials or among civil society groups, and events on issues of public interest.

Since 2010, USAID/Ecuador has partnered with the local NGO, Grupo Faro, to implement the Strengthening Civil Society in Ecuador program. Its goal was to enhance the capacity of local civil society organizations (CSOs) to advocate for democracy-related issues and support efforts to influence legislation and policies related to civil society.

The objective of this evaluation is to determine the results of key project interventions, including successes, impediments, and lessons learned, and to provide a record of the projects’ results as well as a history of the two USAID-funded programs.

The results will also be used by USAID/Washington’s Center of Excellence on Democracy, Human Rights, and Governance and the Bureau for Latin America and the Caribbean, which collects findings on best practices and lessons learned globally and regionally, on both civil society strengthening and local capacity development.