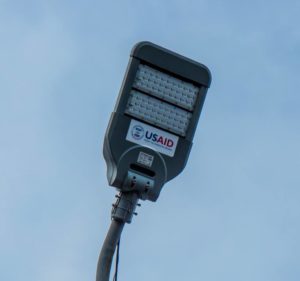 workshop in the outreach event and workshop in the southern Armenian community of Darbas, sharing the results of a newly completed energy-efficient lighting project with 15 local Mayors and other community leaders. Partnering with World Vision Armenia and the Mayor’s Office of Darbas, CEWP implemented the installation of 46 energy-efficient Light Emitting Diode (LED) street lamps, replacing pre-existing Metal-Halide lamps, which were less efficient and far more costly for the community.

At the workshop, Darbas Mayor Mais Mirzoyan thanked both USAID and Word Vision for their support, which has allowed Darbas to achieve greater energy efficiency and financial savings. USAID Armenia Program Officer Richard Byess commended the community of Darbas for its hard work in improving its energy infrastructure, and stated that Darbas may now serve as an example of environmentally sustainable practices for other rural communities in the country.

CEWP engineer Zaven Khudaverdyan explained to participants the energy and cost saving advantages to the new LED lamps, which consume 60 watts, versus the Metal-Halide lamps previously used by the village, which consume 325 watts, or approximately 5-times more energy. According to Mr. Khudaverdyan, Darbas will now be able to reduce its energy costs by at least $2,200 per year. The community will save money both on energy consumed and bulb-replacement costs, since their lifespan far exceeds other lighting fixtures.

The Clean Energy and Water Program (CEWP) is managed by ME&A for USAID under USAID’s Water II IQC. To learn more visit www.cew.am and follow CEWP on Facebook.