Preserving Meaningful Changes at USAID from the Past Administration – ME&A
23983
post-template-default,single,single-post,postid-23983,single-format-standard,bridge-core-3.0.1,qode-page-transition-enabled,ajax_fade,page_not_loaded,,qode_grid_1300,side_area_uncovered_from_content,footer_responsive_adv,hide_top_bar_on_mobile_header,qode-child-theme-ver-1.0.0,qode-theme-ver-28.7,qode-theme-bridge,disabled_footer_bottom,qode_header_in_grid,wpb-js-composer js-comp-ver-6.10.0,vc_responsive

Preserving Meaningful Changes at USAID from the Past Administration

Preserving Meaningful Changes at USAID from the Past Administration

Editor’s Note: “Preserving Meaningful Changes from the Past Administration,” by ME&A President and CEO Thomas England, was first published in June 2021 in Key Issues for the New Administration (Washington, D.C.: Professional Services Council’s Council of International Development Companies) and is reprinted here with permission.

Certain initiatives developed by the previous administration under the leadership of former USAID Administrator Mark Green are worthy of consideration and continuance. 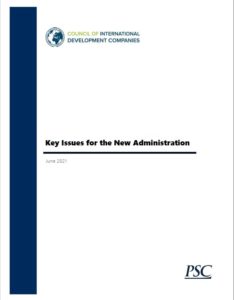 A whole industry of books and articles has evolved around leadership: how to define it, how it relates to politics and how it impacts governance. Wise leadership recognizes that not everything that preceded it was bad. Certainly, any new team wants to put its mark on an agency, introducing new priorities, themes, and modus operandi—testing its own ideas and advancing its priorities. And certainly, the Biden administration and the new USAID Administrator Samantha Power plan to do so and should, taking over from a White House that expressed little support for foreign aid. Recognizing and prioritizing the critical needs of other nations to acquire vaccines against the COVID virus in the short term and helping them to develop policies to fight climate change in the long term are just two obvious examples that the Biden Administration has already begun to implement.

However, certain initiatives under the leadership of former USAID Administrator Mark Green are worthy of consideration and continuance. The first initiative was set forth in the USAID Policy Framework: Ending the Need for Foreign Assistance and became known as the Journey to Self-Reliance. It emphasized the creation of a long-term goal for USAID, building towards a time when foreign aid to developing nations would no longer be necessary. To accomplish this, USAID moved to place a premium on localization—taking steps to extend USAID programming to strengthen local institutions’ own capability to provide the services and programming that the United States and other donors currently provide. Although this has long been an objective of USAID programming, “Localization” seeks new and creative ways to strengthen these local institutions—the for-profit private sector, NGOs, and government—to reach self-sufficiency and function effectively together.

The second initiative was to incorporate the private sector into the development assistance formula as outlined in the USAID Private-Sector Engagement Policy. This was based on the notion that, if properly leveraged, the more abundant resources of the private sector could be mobilized to accelerate development at a much faster pace. To this end, USAID instituted a program of private sector engagement and experimented with different methodologies to mobilize these resources. Though still a work in process, this initiative deserves serious consideration by USAID’s new leadership.

During the prior administration, USAID also produced several additional policies and strategies including the USAID Policy on Countering Trafficking in Persons; the USAID Digital Strategy; USAID’s Protection from Sexual Exploitation and Abuse Policy; the USAID Education Policy; the 2020 Gender Equality and Women’s Empowerment Policy; the Policy on Promoting the Rights of Indigenous Peoples; and the Acquisition and Assistance Strategy, to mention a few. While it would be unrealistic not to acknowledge the tensions that often accompany a transfer of power from one party to another in the executive branch, each of these policies contains many serious and well-researched conclusions and practices that deserve serious consideration by the new leadership.

In addition to its policy considerations, the former leadership of USAID took a serious look at reforming the Agency’s organizational structures – attempting to make them more efficient and effective. While most of these changes received the necessary support of Congress, some of these institutional initiatives are still ongoing. Before any new attempts are made at the reorganization of USAID, assessing the efficacy, or inefficiencies, of the most recent round of bureaucratic realignment within the Agency would be the prudent choice.